Travel should be fun. Travel should be an adventure. Travel should take you places beyond your imagination. Sadly, travel has become a big pain. Airlines treat passengers like cattle and security treats us all like terrorists. So getting there has to be endured. It’s the destination we have to look forward to and it’s my favourite destinations, old and new, that I want to share with you.

The travel bug hit me early. As a school child, I shuttled back and forth to Egypt, where my parents had decamped to avoid post-war England. In those days travel really was an adventure. We climbed the Pyramids at dawn and explored the ruins of Saqqara. We went snorkelling in the Red Sea. Dad took us boating around the Med, to Beirut, when it was the Paris of the Middle East, to the islands of the Aegean: Rhodes, Tinos and Crete are the ones I remember. Later we lived in Libya, and Dad took me on trips into the desert, to the ruined Roman cities of Cyrenaica, such as Appolonia and Cyrene. Not safe areas today.

Kenya and East Africa were next on the list, where I spent a couple of years and travelled far and wide, from the Masai Mara, to Mount Kilimanjaro, which I climbed, to the wild country in the north bordering on Somalia and the Sudan. We enjoyed the beaches of Malindi, sailing and fishing in Lake Victoria among the hippos and crocs, safaris among herds of tens of thousands of beasts on their annual migration. We saw lions, rhinos, zebras, giraffes, gnus, dik-diks and more. We lived by a lake with a million or more scarlet, black and white flamingoes.

In Europe, I bicycled to Brussels for Expo, drove down through France to Cannes and Nice and Monte Carlo, and motored through Switzerland looking for some decent snow for skiing. I came to love some tucked away spots, such as Sark in the Channel Islands, where there are no cars, and the beaches in Anglesey, on the north west corner of Wales.

Brisk breezes in the Caribbean

Then came the big adventure in North America. Over the past 40 or more years I have seen every corner of Canada, in all its vast and wonderful glory. I’ve spent snowy Easter mornings in St. Johns and glorious autumn afternoons in Gros Morne, Newfoundland. I’ve wondered what I was doing in Labrador. I’ve stuffed my face with lobster in Halifax, and driven through quaint villages like Peggy’s Cove and Lunenburg, or marvelled at the splendor of the Cabot Trail on Cape Breton Island. I’ve seen Quebec on New Year’s Eve and Montreal in the height of summer. There’s barely a corner of Ontario I’ve skipped, and that includes taking the train up the Agawa Canyon in the fall. Nunavut hold no secrets, whether it’s 60 below in winter or merely one degree above in July. I’ve seen the inuksuit, and the flocks of snowy geese, yes and the polar bears, though they were more impressive in Churchill, Manitoba.

Out west, there are the magnificent prairies, which go on forever under endless skies of blue, and the mountains I’ve ridden through and helicoptered over. I’ve marvelled at the sunsets on Long Beach, Tofino and been drenched in the rain forest on Haida Gwaii. 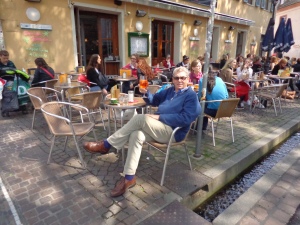 Enjoying the ambience in Freiburg, Germany

Enough of Canadian winter: snowbirds head south when the weather gets intolerable and I’ve enjoyed sailing in almost every one of the Caribbean islands. And the Bahamas, which aren’t strictly in the Caribbean, where I love the powdered sand of the beaches and the crystal clear water. Barbados has been a frequent stop, where I was married a decade ago (for the 2nd time) and where I spent a delightful  week celebrating our 10th wedding anniversary in December 2019. In Central America, I’ve tried Belize, Costa Rica and Mexico galore. Now it’s time to look for new places to enjoy, get updated on Europe, especially England which I hardly know, and France and Italy where I have been absent for far too long. There’s still a lot of world out there to explore and share with you. My last European adventure was chasing the Northern Lights in Norway. A planned excursion to Cascais in Portugal was abandoned at the start of the world pandemic and we all know what happened next. Travel simply stopped for most of us.

As soon as the restrictions lift enough to make travel fun again, we’ll be off on more adventures. Come along for the journey.

I’m contributing regularly to Trip Advisor under my pseudonym gentlemansportion. Latest statistics show 147,284 readers of 230 reviews with 140 helpful votes. I’ve been awarded Top Contributor status with reviews of 130 restaurants, 24 hotels, 52 attractions and an airline in over 66 cities, plus nine first-to-review articles and reviews of five Travellers’ Choice winners. Readers are 38 per cent from UK, 32 per cent from Canada, 18 per cent from the US, with the remaining 12 percent from ‘other.’

Trip Advisor gives contributors points and badges, which have no discernable value, but at least encourage us and look pretty.