IN THE WAKE OF THE PHOENICIANS Cruising through the Pillars of Hercules to the gardens of the ‘Fortunate Isles’ and beyond.

The warm October sun retreated behind Malaga’s Moorish palace of Alcazaba as our cruise ship left Spain’s Costa del Sol for two weeks of “la vida dolce” on the Mediterranean and North Atlantic.

Just as the Phoenicians and Carthaginians had done centuries before, we were sailing the Straits of Gibraltar between North Africa and the Spanish Province of Andalucía on our way to Morocco, the Canary Islands, Cadiz, Madeira and Lisbon. But unlike our predecessors, we were doing it in style aboard a 90,000-ton luxury liner.

The Rock of Gibraltar – one of the two Pillars of Hercules

After a leisurely overnight sail from Malaga, the 2,000-passenger Queen Victoria passed through the Straits of Gibraltar early the next morning where the “Rock” appeared off our starboard bow. A large lump of limestone that rises 426 metres into the air, Gibraltar was considered by the ancient Romans and Greeks to be one of the two Pillars of Hercules which marked the end of the world (the other pillar is 25 km across the strait on the Jebel Mountains of Morocco).

Once past Gibraltar, we headed south along the African coast to Casablanca, the Moroccan city that was immortalized in the movie of the same name starring Humphrey Bogart and Ingrid Bergman. In the city’s souk (market), we watched craggy-faced men dodge in and out of winding alleys as they rushed from the pier, their wheelbarrows brimming with just-caught fish. And we saw women dressed in traditional garb pick their way through wooden stalls overflowing with fresh fruit, pungent spices, and colourful spices.

We spent the next day cruising the Atlantic Ocean west of Morocco on our way to the Canary Islands. In their chronicles, Homer and Herodotus hailed the Canary Islands as gardens of great beauty, while Spanish explorers called them Islas Afortunadas (Fortunate Islands) because of their temperate climate, green forests, soaring mountains and beautiful beaches.

On Tenerife, we took a four-hour bus tour to Mount Teide National Park, where the snow-capped peak of El Teide rises 3,718 metres above sea level. The park’s rocky slopes are filled with some of the most vibrant wild flowers on earth, including those unique to the area such as the Violeta del Teide and the Rosal del Guanache. The area is flanked by an enormous amphitheatre of collapsed craters to the south called Las Canada, where tourists can hike around unusual rock formations.

The next day we arrived at Madeira, the Portuguese “Isle of Eternal Spring” that is buffeted by warm currents and blanketed with colourful sub-tropical flowers year-round. Decanting in the capital of Funchal, we took a tour bus up winding roads draped with fragrant eucalyptus to the remote mountain peak o Eira do Serrado. The summit’s miradouro (look out) provides a spectacular views of Madeira’s highest peaks, and of the hidden village of Curral das Freiras (corral of the nuns) located several thousand metres below in a deep crater.

We ended our tour in the village of Monte, where we boarded wooden toboggans for a snowless sleigh ride down 4km of cobble-stoned streets on the way to the capital city of Funchal. The sleds, which look like big wicker baskets, were originally used to carry supplies down the hill to the center of town before becoming a tourist attraction in the 1960s. As we careened down narrow streets at speeds of up to 10km per hour, a pair of drivers called “carreiros” kept us from sliding into the gutters by tugging on ropes and kicking our wooden runners. 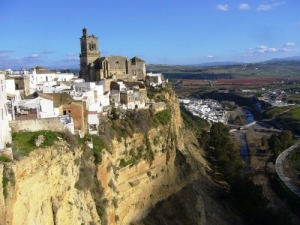 Two days later, our ship reached Cadiz on the southwest coast of Spain, where we boarded a tour bus for the nearby hillside town of Arcos de la Frontera. The best way to discover Arcos is to wander round the old town, which is quintessentially Andalucían with its narrow cobblestoned streets, whitewashed houses, Renaissance buildings and Moorish influence. In the Plaza del Cabildo, there’s a cliff-top belvedere with breathtaking views of the Rio Guadalete and valley below, and an 18th-century church, the Basilica-Parroquia de Santa Maria with an imposing clock.

We concluded our tour of Arcos with some tapas and wine at the historic local Parador hotel, and returned to our ship for the 400 km-voyage north to Lisbon, Portugal.

According to legend, “Olisipo” (Lisbon) was founded by the Greek hero Odysseus who was drawn to the beautiful seven hills overlooking the Tagus River on his voyage home from Troy. Today, with its pleasant esplanades, historic districts and red-tiled roofs, Lisbon exudes old-world charm.

A clanking electric tram in Lisbon

We took the clanking electric tram from the Baxia (lower town) up to the Alfama, the original Moorish quarter with narrow alleys and pastel-coloured houses perched on a steep hill below the Castelo de São Jorge. Built in the 5th century by the Visigoths and enlarged by 9th-century Moors, the castle provides a sweeping vista of Lisbon and the Tagus estuary.

After lunch in one of the Alfama’s sidewalk cafes, we went to the magnificent Mosteiro dos Jeronimos in the cross-town district of Belem. Commissioned by King Manuel I in the 1501 to mark Vasco de Gama’s return from his historic passage to India, the monastery boasts elaborate detail and richly carved images, many in maritime motif.

The next afternoon as our ship left Lisbon for its final destination, we were hit with gale-force winds and high seas as we crossed the notorious Bay of Biscay. By the time we arrived in Southampton, England, two days later, we had developed a new appreciation for the early mariners who had navigated these seas in nothing more than small wooden boats. And without the aid of Gravol!!