A friend makes an offer too good to turn down.

A phone call to one of my oldest friends to check on dinner availability while passing through London elicited an invitation to stay at his farm house in Provence, a place he’d built up over 35 years, but which I’d never visited. France wasn’t in our plans or budget, but it was too good an offer to turn down, given that my pal was known to be a charming and generous host. 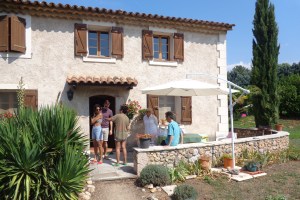 We found a flight to Nice on British Airways from Gatwick, which suited us well as it enabled a side trip to see my 95-year old mother, still going strong in the castle town of Lewes, East Sussex . The airport was the usual nightmare. This time we were directed late to one gate by the departures board, only to be sent scurrying to another gate at the exact opposite end of the airport. The only seats we could get were in Club Class, which seems extravagant for such a short flight, but were comfortable in the extreme, with solicitous service to match.

After some mis-adventures with the directions, we arrived in the picture perfect hill village of Villecroze, terribly late for lunch. I’d previously travelled the road from the village to the farm virtually on Google Street View  so knew approximately where to turn. And so, shortly after our arrival at 1430, we sat down to lunch en famille at a long table on a cool patio under the shade of a spreading vine. The sun was hot, the food excellent, the Chateau Thierry rosé wine copious and the pool inviting, so after allowing time for digestion, a refreshing splash was inevitably followed by a long nap.

September in Provence is still glorious. The whole French nation seems to take its collective vacance in August, so those who can holiday when they wish get an extra bonus by travelling when the French have returned to work, well rested. Under the law, every citizen is entitled to five weeks of paid holiday, as well as 11 other days off a year. Most of the inhabitants take their summer vacations in July or August, and most major businesses close, including extraordinarily, many catering to tourists. All of France takes to the roads, railroads, boats, and airways, so traveling especially during August is generally not recommended for foreign travellers.

By the time we arose the next morning, our host had done a run to the local bakery for crispy fresh baguettes and delicious croissants, which we took with café au lait on the front patio,  cooler at this time of day. Apparently, it had rained steadily for the six days before our visit, but we had brought sunny weather with us and another azure sky beckoned.

By coincidence, another Brit friend, whom we had met in Toronto, had a condo nearby and was in residence at the same time. Our host insisted he and his Canadian wife join our party for lunch, and so we whiled away another long afternoon, drinking lots of Terres de Berne Rosé from Château de Berne, just down the road in Lorgues, and occasionally available from the LCBO. No complaints at all.

This lifestyle suits me fine. Our hostess served Coronation chicken, a delicious dish I’d quite forgotten, created for the Queen’s accession to the throne in 1953. 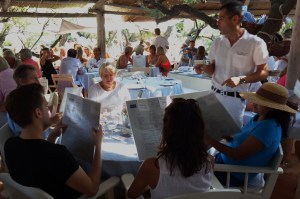 Lunch under the trees at Club 55

The following day, a Sunday, we convoy into Saint-Tropez, 90 minutes on a series of winding mountainous roads. First, apéritifs at Brasserie Sénéquier  famous for its tarte tropézienne but more importantly a place to see and be seen for the past 125 years. We get a good table right on the waterfront and watch the rich men, who look like aging Russian gangsters, promenade past, much younger women on their arms.  My companions order beer, citron pressé and wine and I settle for an old favourite, Campari and soda. The tab comes to 77 Euros for six drinks. Drinking on the quay is not cheap, but we’re not really paying for beverages, we’re renting a front row seat for a while. Highlight for me, as a sailor, is to watch a mega yacht backing into its slip right in front of our table, with less than a metre clearance on either side. 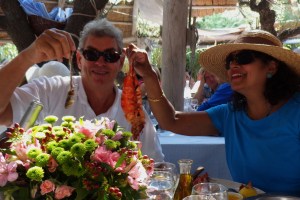 Then it’s off to Plage de Pampleonne for lunch at Club 55, opened in 1955 under a canopy of trees and gauzy screens. Lots of odd people, more funny old Brit ex-pats, more Russians girls, lips ridiculously plumped up with filler, to watch. But owner Patrice de Colmont  is attentive. The  food is excellent, the wine flows – this time we try Chateau  Minuty, a famous local rosé  – and the company sparkles. We rise at 1630 and head to the beach bar. Anyone topless on the beach really shouldn’t be, but the dozens of mega yachts moored off the beach belie the economic crisis in Europe.

The next morning, it’s back to Nice for the flight to Gatwick. Unbelievably, British Airways screw up the departure gate again and we rush from one place to another, almost (but not quite) spoiling the golden glow of a weekend in Provence.