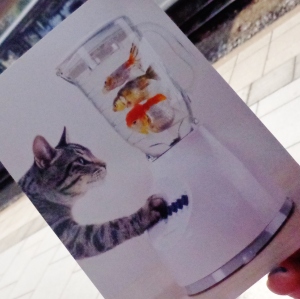 Finding humorous postcards in Switzerland can be a challenge, especially for pets.

I hope you like this postcard. Diane couldn’t resist it. She thinks it will appeal to your feline sense of humour.

British Airways has given us Euro Traveller boarding passes. This is one step below Euro Club, but I trust it is many steps above Euro trash. When we land at Basel airport we are actually in France and on the bus into town we pass near Germany to get into Switzerland. All three countries meet here and people on the bus are speaking French, German, Swiss German, a little Italian and no English. Euro travellers indeed. 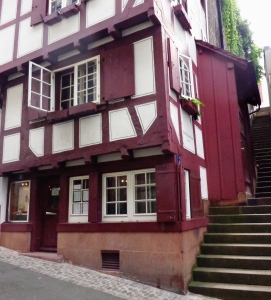 A shop in a building which dates from 1497

Basel is ancient and quaint and our well-travelled Dutch hosts have welcomed us to their charming Swiss town house. Quite coincidentally it is painted orange, the Dutch national colour, on a quiet street of many coloured houses. Vines and lots of wisteria creep up the walls and soften the buildings in the narrow cobbled streets. We explore the old town where our friends live. No wars have blighted the town, no bombs have ever fallen here. The last time anyone attacked they were using arquebuses. So we see lots of buildings dating back to the 1400s and 1500s. The streets are steep and winding and puffing up one alley, we find a fortunate bar to stop at and have a refreshing cocktail. Rosarios is not exactly Swiss, and the waiter turns out to be Sicilian, but they serve a splendid and refreshing new cocktail.

Restaurant Spillmann hangs over the river

Aperol spritz is all the rage, and we love it. It’s made in a tall glass with ice, one shot of Italian Aperol digestif, two shots of sparkling Prosecco, a dash of soda and garnished with a slice of orange. The sunny colour of our drinks seems to keep the threatened rain away, so we have another at every opportunity and indeed during our three day stay, no rain falls. The sun peeks through once or twice, but no more, and it is cool, but that’s the norm for this European summer. Frankly, we could use some global warming.

We lunch on tiny open face sandwiches in Restaurant Spillman overlooking the Rhine, which is in full spate after heavy rains upstream in Germany. Amazingly, someone is swimming in the raging torrent. Our host, who is incredibly fit, explains that the locals walk up the river bank a mile or so, put all their clothes in a waterproof bag which they tie around their waist, then drift down with the current until they reach the exit beach. It looks as exciting and dangerous as white water rafting in the Rockies, which I have done once and don’t need to try again. 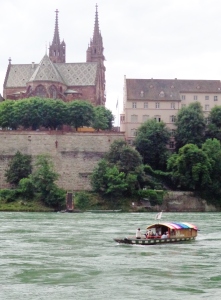 Engineless ferry across the Rhine

When we cross the bridge, we see that the river walk is flooded, another sign of the high level of the water and the wet summer Europe is getting. Across the river at several strategic points, archaic wooden passenger ferries run entirely on the power of the current. At the bow is a long lever attached to a cable which in turn is attached to a car which travels on another cable strung from river bank to river bank high above the tallest boat which could pass. All the operator has to do is push the lever over to one side, turn the tiller the opposite way and the current takes the boat back to the other side. The journey costs less than two Swiss francs and takes perhaps three minutes in the swift current. As we wait, briefly, for the ferry to return, we examine weird bright coloured knitting woven around riverside railings, trees and benches. Guerilla knitters have struck. The journey from Klein Basel to Basel drops us at the bottom of a steep flight of steps below the historic Münster, which stands at the top of an easily defended cliff. 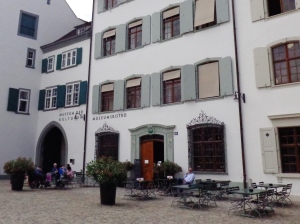 Museum and bistro in the Munsterplatz

In the  Münsterplatz we wander under the shade of spreading chestnut trees, until the threat of rain sends us into the Museum der Kulturen. Thinking to check out some Swiss culture, we are quite surprised to find that the place is devoted entirely to other cultures, more like a museum of anthropology. We stare at head dresses made of many coloured feathers, and wonder how many little tropical birds were sacrificed so the chiefs could look more splendid than their rivals.

Tiggy, you would have been sad to see a cloak made of jaguar skin, but at least the big cat was skinned more than 100 years ago. Long-time dead.  After learning more than we need to know about Brazilian indigenous peoples and their hunting skills on one floor and strange collections of elephant heads and Thai hats on another floor, we abandon kulturen for the restaurant next door. 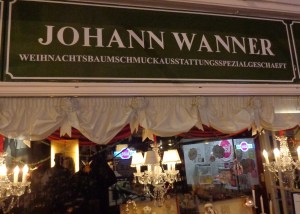 At the Museumsbistro we are warmly welcomed and enjoy Aperol spritz again and delicious chocolate and pear cake. Better than afternoon tea. If we had been in a museum and art show mood, there were several more to visit as well as an exhibition of Picasso paintings from private Swiss collectors, almost never seen. There’s another show featuring Holbein. We pass on all of them in favour of window shopping. One store is filled with Christmas ornaments and is titled with one of those marvellous German compound nouns – Weihnachtsbaumschmuckausstattungsspezialgeschaeft. A toy train shop has a button below the window, which I cannot resist pushing to start a miniature engine running round its track.

We marvel at the historic winding narrow cobbled lanes, climbing steeply back from the river, the clean streets and alleys, the occasional disfiguring graffiti and the amazing public transport. Tickets on the latter are entirely an honour system, simply bought at coin or credit card machines at every stop. Bendy buses and long articulated trams run everywhere, mostly green, but also covered in advertising. With our hosts’ guidance we easily find our way about town by bus and tram and wonder why our home town has so much difficulty getting the trams and cars to share the road after this example of Swiss efficiency. 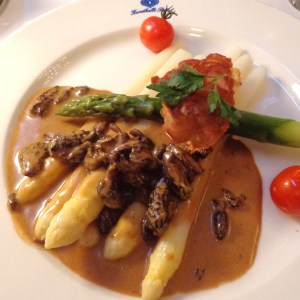 The last of the white and green asparagus, with morel mushroom sauce

Our hosts are marvellous cooks, and we mostly eat in because Switzerland is ferociously expensive, but we dine out a couple of evenings. First, we try the Lowenzorn, a student society-owned establishment, which serves traditional Swiss food. The name literally means “angry lion” which we interpret as “lion rampant.” Patrons sit at long communal tables, although on the night of our visit it is not busy and we have our own section. We sit in the courtyard under an awning, as the dining room is being renovated. We can imagine the rowdy beer drinking sessions that must accompany student celebrations, but we’re here during exam week and the students appear to be very diligent in their studies.

Another night we go to the best restaurant in Basel, with French cuisine. Kunsthalle, or art house, is decorated with lush murals of buxom young women, a reminder of the sadly now closed Café des Artistes in New York. We have arrived on the last day of the asparagus season, so three of our quartet order asparagus. My tender white shoots come topped with a rich sauce of truffle-like morel mushrooms, unbelievably tasty. I start my meal with steak tartare and finish with a taste of Swiss Highlander malt whisky. It’s remarkably good. Did I mention Switzerland was expensive? Our share of dinner comes to CHF 287 or $CAN 318.

Hope all is well at home, Tiggy. A big meow from Diane. We’ll be back soon.