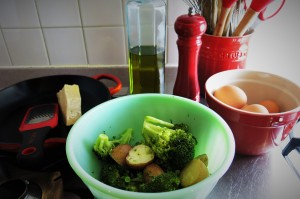 What to do with left overs? Frittata, the Italian omelette, is one solution.

I’m back at one of my favourite markets to do the mid-week shop. With farmers’ markets available to us on more than just Saturdays, we can shop for fresher food more often and that’s a much healthier option. First of all, fresher food retains more of its vitamins and looks and tastes better too. But more importantly, when one buys just what one needs for a few planned meals, the waste is much, much less.

If you’ve ever wondered how much food we chuck out every week, you’ll be appauled by the reality.

A report in Britain’s The Guardian newspaper, which I wouldn’t normally be seen dead reading, on account of its lefty wanker philosophies, nevertheless has an outstanding article on home food waste.

Ugly tomatoes, at St Lawrence Market, taste just the same, if not better!

The average UK family is wasting nearly £60 a month by throwing away almost an entire meal a day, according to a report that reveals the scale of the ongoing challenge to reduce household food waste. Brits are chucking out the equivalent of 24 meals a month, adding up to 4.2 million tonnes of food and drink every year that could have been consumed. Almost half of this is going straight from fridges or cupboards into the bin. One-fifth of what households buy ends up as waste, and around 60 per cent of that could have been eaten.

There has been no progress in reducing meat and fish wastage, with Brits still throwing away the equivalent of 86 million chickens every year. The top three foods being thrown away uneaten in British homes are bread, potatoes and milk. The equivalent of 24 million slices of bread, 5.8 million potatoes and 5.9 million glasses of milk are being wasted daily. The study by the government’s waste advisory body, the Waste and Resources Action Program (Wrap), shows that since 2007, avoidable household food waste has been cut by 21 per cent to 4.2 million tonnes, saving consumers almost £13 billion.

As you’d expect, the main reason for all this waste is shoppers buying more than they need, lack of clarity around storage and labelling and over-estimating portions, Wrap said.  The UK’s largest retailer, Tesco, agreed to reduce its multi-buy items and other promotions after revealing that 35 per cent of its bagged salad is being thrown out. It also found that 40 per cent of apples were wasted, and just under half of bakery items.

Bottom done, ready for the oven

In the US, and I suspect Canadian stats will be similar, the problem starts at the supermarket. Apparently, most grocery stores operate under the assumption that their customers are more likely to buy produce if it’s from a fully stocked display.  This assumption leads to overstocking, as well as damage to items on the bottom of those perfectly constructed produce pyramids.

Customers have been conditioned to expect perfect, identically shaped produce. I’ve talked about this on my television show Market to Table when I chat with farmers who are appalled that their customers don’t seem to realize that a wonky carrot tastes just as good as a straight one. At least at the farmers’ market we can actually buy the wonky carrots. At the supermarket they have already been rejected by the buying department.

British chef and TV personality Hugh Fearnley-Whittingstall relates the story of one parsnip farmer who goes out of business because retailers wouldn’t buy his slightly less than perfect parsnips. The program shows piles of parsnips rotting at the farm. Fearnley-Whittingstall’s point is that quality has nothing to do with the shape, size and color of the veggie. The supermarket manager he interviews blames consumers who expect perfection.

In addition, most consumers have no idea what expiration dates, sell-by dates, use-by dates, or best-by dates mean. Consumers (and many sellers) wrongly assume that food is no longer good after these dates. Instead, sell-by dates are guidelines for sellers to indicate peak freshness. Most foods are good long after the sell-by date. Fearing consumers will either not buy the food or think the stores are carrying old products, most supermarkets pull the items out of stock several days before the sell-by date.

A slice of left-over perfection

A huge percentage of food waste could be avoided if more consumers were willing to buy bananas with brown spots, or if they understood they can eat ice cream a couple of weeks after its sell-by date. French supermarket chain Intermarché recently started a program to change their customers’ perception of wonky fruit and it has been a huge success, selling millions of tons of weirdly shaped fruit.

Having got the food into the house, consumers then compound the problem by not planning meals and throwing the food out when it is still perfectly usable. One of my solutions, when faced with a giant head of broccoli or cauliflower that I can’t possibly use at one meal, is to cook it all and save the rest for left overs the next day. Small quantities of actual unplanned left overs can easily be reheated the next day. A creative cook will have a few recipes in their back pocket to deal with left overs.

Here’s one fine solution to the problem, using up whatever left overs you have in the fridge and potatoes, ham and eggs too. 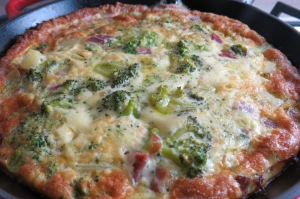 Frittata, hot from the oven

This wonderful Italian open omelette is a great way to use up left-over veggies. This version just uses what I had in the fridge that day, but you can literally use anything you fancy, even cooked or smoked meats.

Coincidentally, Jamie Oliver had a frittata recipe in his Globe and Mail column back in April 2016 and served it with a side salad of toasted pine nuts, torn parsley leaves and lemon juice with a drop of extra virgin olive oil. I tried it and it’s delicious.

Ollie helps with the typing, occasionally leading to inadvertent errors