PROCRASTINATING AWAY IN PV 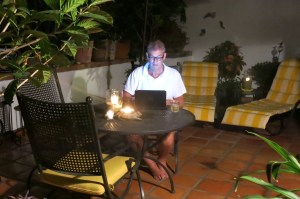 Procrastinating on the patio in PV

Ask me to write you a speech, and I’ll have it back in no time. Press release? Done in a tick.  Video script. No problem.

The producer for the new television series phones. Start writing your scripts, she says, We’ve got the green light. Instant brain freeze. Procrastination sets in. There’s no one to whine to. I agreed to do this. Willingly. But writing for one’s own self seems infinitely harder. How am I to get the allegedly witty, apparently debonair, supposedly know-it-all town-and-country man persona we have sold to the network down on paper?  TV host, I know ye not.

Elmore Leonard, the prolific American crime writer, who died last August, had a famous list of rules for crime writing. When I was attempting to write my first novel, I decided to try for a crime story, mainly because I enjoyed the genre. His rules made for some excellent guidelines. Leonard’s last and best rule, was to leave out all the bits that reader’s skip. I thought that would be a good rule for writing for the television show: leave out all the bits that bore the viewers.

In fact there’s far too much exposition in television, telling the viewers things they should already know, or telling an interview subject things they certainly know about themselves, but allow the interviewer to show off how good their research is and amaze everyone with their brilliance. The late Brian Linehan, much parodied on Second City TV, was a master of the long rambling question, to which the only possible answer from a dumbfounded celebrity, was “How did you know that?” That’s another trap to avoid.

Leonard again: Never open a book with weather. ‘It was a dark and stormy night’ is the oldest cliché in the writing business. Noted. I won’t talk about weather. In fact we’ve discussed my outfits for the show and decided that whatever the weather, I won’t be wearing my big Canada Goose coat, because it just makes me look too big. Let’s hope we aren’t shooting in another Polar Vortex.

Back to Story Seminar.

I first became aware of the famous writing instructor Robert McKee when I went to see the 2002 Nicolas Cage and Meryl Streep movie Adaptation. Suffering writer’s block, the Cage character goes to McKee’s seminar for help. McKee is wonderfully and acerbically played by Brian Cox.  Truthfully, I was more interested in the McKee character’s memorable lines than the rest of the movie, so when I discovered McKee was presenting his legendary three-day seminar in Toronto, I immediately signed up. I had the notion that the story I was working on would make a fine screenplay, if only I knew the tricks of the screen writing trade.

I approached the suburban campus where McKee was to lecture with enthusiasm. I needed some juice to spice up my writing. I’d taken a fiction writing course at George Brown College and a mystery writing course from a famous author at the University of Toronto. For a while, I thought I was well on the way to becoming my idea of a real novelist, with my second novel in the outline stages and several chapters written in first draft.

Then nothing. I couldn’t find the rest of the story. It wasn’t exactly writer’s block, more writer’s excess – a constipation of ideas and a diarrhea of words – words flowing out every day, but without adding a jot of interest to my story. In fact, unbeknownst to me, my writing career was about to go through a rough patch. My first novel was with a New York agent and was going the Canadian rounds through the good offices of my local agent. That’s a huge step to accomplish, but it was en route to being rejected by all 15 of the then extant Canadian publishers. To further dampen my spirits, the New York agent declined to represent me.

McKee starts his seminar with some rules. No cell phones – if your phone rings, you have to bring it up on stage and it will cost you $20 to get it back at the break, he says. Don’t be offended by his use of swear words to make a point – if you don’t like profanity, there’s the f*cking door, he says. Don’t ask questions – all will be revealed by the end and he doesn’t like interruptions to the flow of brilliant concepts he’s going to share over the next three days, he says. I’m not sure I can put up with this bombastic American for three full 10-hour days. Yes, 30 hours of one man talking on a stage with no props and no visual aids. I decide to make detailed notes on what he says, and hold off judgment until the end.

Discovering that decade old notebook, is what has set me writing today.

McKee’s strength is that he is a dynamic speaker, with really good ideas and a massively interesting way of getting them across, with witty references to characters and plots and entertaining movie anecdotes. He suggests that we budding screenwriters make an inventory of our own living experience, writing it down and making a vivid diary. “Daydreaming is not research,” he says. When conjuring up other lives and other worlds for a screenplay, imagine what it could be like and see the world we thought we knew in different ways.

Writers with careers, professional writers, are people who can repeat success, but he suggests we should feel free to destroy our work. Ninety per cent is rubbish and only 10 per cent is worth keeping. Well, that puts paid to my novel. It must be in the 90 per cent category. Perhaps we can live off the other 10 per cent.

The TV scripts demand attention. I’m trying to put my finger on my on-camera persona. I’ve insisted on writing my own material, since I have a real fear that I won’t be able to remember my lines once the camera starts rolling. If I’ve written the stuff, my thought process goes, then the words are already in my head, which should help in getting them out. But I don’t want to fall into a Robin Leach caricature. Remember him shouting “Champagne wishes and caviar dreams,” on Lifestyles of the Rich and Famous? I have been paid real money to do impressions of Mr. Leach on voice-overs. And I don’t want to go too far off the rails like a character from Little Britain: “Oh we don’t talk to the likes of you. We’re snooty people,” exclaims David Walliams playing deluded transvestite Emily Howard. I don’t consciously recall cross-dressing, but I can get the character spot on. No, I’m looking for the real me, and he’s buried deep under layers of living experiences.

I think of asking friends for advice, but then I read my notes. “All advice is self-serving,” says McKee. Next to that I find two other quotes: “The only way to win the war on cliché is to do research,” and “Creativity demands research, research inspires creativity.” Good stuff that. I head out to do some more research at the airport, where we hop on a plane to Puerto Vallarta, Mexico.

Not much more writing is getting done, as there are far more reasons to procrastinate in the sun. Tonight we head out to a wonderful concert by guitarists Latcho and Andrea, who bill themselves as The Blond Gypsies. Latcho plays and sings brilliantly in the flamenco style and Andrea accompanies him on vocals, guitar and castanets. He makes me laugh like a drain when he announces a song from one of their many CDs. “We called the album Flamingo Guitar,” he says, “Because that’s what Americans ask us to play.”

It was worth an evening of procrastination to hear them play. Tomorrow, I’ll start writing.

This article was originally published on February 20, 2014.