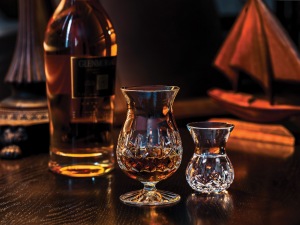 Whisky related drinking vessels have shown up on my bar and I’m trying to decide which ones make the whisky taste better.

Years and years ago, I was in Halifax on business and happened upon the Nova Scotian Crystal shop on George Street. At one side was the store with lots of lovely crystal glasses and on the other two men were blowing crystal stemware. In the store, I spotted a beautifully shaped and cut crystal single malt whisky glass shaped like a thistle. I lusted after it immediately, but I was on the first leg of a cross country road trip and didn’t want to risk taking it with me. Time intervened and I forgot about the glass.

Then about three years ago, at Manchester airport’s excellent World of Whiskies shop I was introduced to the Glencairn whisky glass. At nine o’clock in the morning it was filled with a splash of fine single malt and a wee drop of water. I bought the bottle of whisky and a pair of the glasses and when I got them home realised that the shape was very similar to the Nova Scotian single malt glass. One day, I thought, I should pair them up and see who wins. 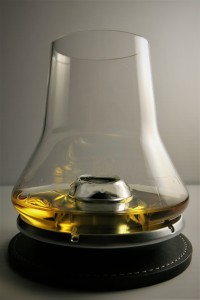 Preparing for the taping of the next season of shows in our television series Market to Table, I was visiting the showroom where our demo kitchen is located. Apart from having a fully functional and perfect kitchen set-up, the firm of W.D. Colledge also represents many suppliers of equipment to the restaurant and hospitality business, including, believe it or not, a French firm which makes a whisky glass as well. Peugeot are famous for cars, but someone in the family also invented Les Impitoyables : set de dégustion Whisky. The elegant glass works on a similar principal to the others, a wide bowl to expose more of the whisky to the air and a narrow neck to concentrate the aroma. But the difference is that the Peugeot glass comes with a clever metal base which can be left in the freezer until needed, and then cools the whisky without diluting it with ice.

Philistine that I am, my regular drinking whisky is either J&B in the summer, because it is light and easy, or Johnny Walker Black Label in the winter, when I can better appreciate its smokiness. I drink this out of a large Waterford crystal glass, filled with ice, the whisky free-poured over the rocks until I feel like stopping. Sometimes I stop at a couple of ounces, but not often. It’s more like a bucket than a glass. It’s big enough to take the huge round ice globe I make with my special Johnny Walker Black Label ice mould. So it is against this vessel for gluttonous over-indulgence that I will judge these three delicate single malt glasses.

Now to the venerable Scotch bucket to see what lurks within and what will be a suitable match for the three virgin glasses. Since I have two amiable whisky loving sailing companions along to help me judge, I will have to pick a bottle of some note. 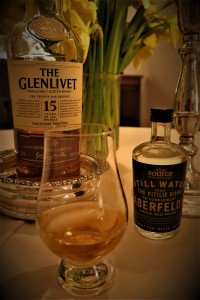 The Glenlivet 15 poured in the Glencairn glass

First out of the bucket is a bottle of The Glenlivet 15. Sailor One tries it in the Glencairn glass to start. He finds aniseed in the bouquet and in the aftertaste. There’s no doubt the tulip bulb shape of the glass helps to collect the delicate fragrance of the single malt and the narrow neck concentrates the aromas and deliver them efficiently to the nose. Sailor Two remarks: “I never analyse whisky. I just decide if I like it or I don’t. I like The Glenlivet. They serve it in business class on Turkish Airlines.” S2 holds the Nova Scotian Crystal whisky glass lovingly in his fist. “I love this glass,” he says. I tell him it is cut in the Margaree pattern, named after Nova Scotia’s legendary salmon stream in the Cape Breton Highlands, but I think he’s beyond caring.

I try the Peugeot glass, allowing the whisky to sit for a few minutes on it’s frigid base, which in turn sits on a lovely hand stitched leather coaster. The cooler spirit holds back some of the aroma, better allowing it to develop on the palate. I find it creamy and rich, and although I can’t get the aniseed specifically, there’s definitely a sense of fruit and nut, with a lingering spice on the finish enhanced by the delicate shape of the glass. 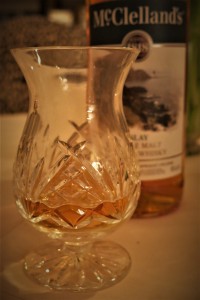 Sailor One has brought a bottle of McClellands Islay Single Malt to add to the bucket. It has no age statement but it goes down very smoothly. In the Peugeot glass the aromas are concentrated and become very smoky, almost overpowering more subtle essences. I put a good glug into the glass, and add a drop of Scottish burn water, courtesy of  Aberfeldy. I find it quite smoky, with just a trace of vanilla and a hint of citrus. The strong Islay character comes through with traces of the sea. Sailor One, who has washed out the Margaree, helps himself to a Gentleman’s Portion. He agrees it has a powerful Islay smoky finish and notices a hint of iodine. He declares the Nova Scotian Crystal glass heavy and serious.

Aultmore of the Foggie Moss

Finally, we turn to a bottle of Aultmore of the Foggie Moss, 12. This once very rare single malt has been released under the Last Great Malts of Scotland banner. It comfortably pours into the Margaree where its warm colour glints among the crystal. This malt comes from high up the Speyside, where the land is damp and the moss is dewey. On the nose I can sense green grass meadows and fresh wild herbs. Sailor One adds a few drops of burn water and declares a citrus note. Sailor Two has packed it in for the night.

In anticipation of a good tasting session, I have made a rich cottage pie and it all goes in second helpings. The sailors consume a bottle of good red with their meal, while I stick to Johnny Black in a large crystal glass, diluted and chilled with a large globular iceberg made in my custom Johnny Black mould. I only mention this because it could be that our taste buds were overloaded, even before we began tasting the malts. But we all agreed that we enjoyed all three, and loved trying out the new glasses. As I poured my friends into an Uber, we agreed we couldn’t find a winner. “They are all winners,” called out Sailor Two from the back seat.

Since launching this blog in December 2012, I have apparently tasted and written about more than 50 whiskies. All of them have been good and some of them exceptional. Here’s the full list with links to the original articles. But don’t be a masochist. Just dip in and sample one or two delights!