The argument over what constitutes an authentic Salade Niçoise continues to rage. Today, I’m adding fuel to the fire, as I continue my search for new salmon recipes.

The first controversy is over the lettuce. Some aver that the lettuce must be crisp romaine (or cos as the Brits call it), while others aren’t so particular. In Britain it is known as cos lettuce from the Arabic word for lettuce, khus, while the North American romaine lettuce comes from the French laitue romaine, originally introduced to Europe by the Romans from Egypt. A large camp of traditionalists argues for no lettuce at all.

The second debate is whether the salad should include cooked vegetables or not. As I wrote in Market to Table: The Cookbook, some purists insist all ingredients should be fresh, but the version served in North America usually has cooked potatoes and green beans.

Finally, the argument about the fish: canned or fresh seared tuna; anchovies in oil or salted; both, none, or one or the other.  Julia Child in Mastering the Art of French Cooking goes for both tuna and anchovies. Incorporating potatoes, green beans, both tuna and anchovies and a vinaigrette dressing she subsequently demonstrated the recipe on her television show, The French Chef, in 1970. As always, I agree with Julia.

The version known in Nice in the late 19th century was a basic combination of tomatoes, anchovies and olive oil, described as “simple food for poor people.” On the other hand, Henri Heyraud, author of La Cuisine à Nice, wrote in the ’20s that the true salad should add quartered artichoke hearts and sliced raw peppers, with tomatoes, black olives and anchovy fillets. The dressing should be olive oil, vinegar, salt, pepper, mustard and chopped fines herbes (parsley, chives, chervil and tarragon). No mention of lettuce or tuna at all, but I love the idea of artichoke hearts and shall include them in future offerings at my table.

Famed chef Auguste Escoffier was born near Nice and added potatoes and green beans which certainly validated this version of the salad. His posthumous 1941 cookbook contains 2,972 other recipes.

Former Nice mayor Jacques Médecin takes the traditional approach. In his 1972 cookbook La Cuisine Du Comté De Nice he says the salad should be served in a wooden bowl rubbed with garlic and exclude boiled vegetables. He wrote that the salad should consist mostly of tomatoes, which should be well salted and dressed with olive oil. The salad was garnished with hard-boiled eggs, and either anchovies or canned tuna, but not both. He added raw vegetables such as cucumbers, purple artichokes, green peppers, fava beans, spring onions, black olives, basil and garlic, but no lettuce or vinegar. Médecin, on presenting the dish, commented: “As the various ingredients that go into salade niçoise are of bright and contrasting colours, they can be arranged most decoratively in the salad bowl.” I try to make an effort when presenting this salade composée, whether in a bowl, or plated.

Le Cercle de la Capelina d’Or certifies restaurants in Nice and sticks with Médecin’s notions. They reject commonly included ingredients such as green beans and potatoes, as well as innovations such as sweetcorn, shallots, mayonnaise and lemon.

In 2016, French Michelin-starred chef Hélène Darroze posted a salade niçoise recipe on social media that included cooked potatoes and green beans. The trolls were quick to attack and called her recipe a “sacrilege” and a violation of “ancestral traditions.”

My go-to bible of French cooking, Larousse Gastronomique, calls for equal parts of diced potatoes and French beans, seasoned with oil, vinegar, salt and pepper and mixed with anchovy fillets, olives and capers; garnished with quartered tomatoes. On the subject of lettuce they are ambivalent on variety and offer mesclun or mixed baby salad greens as an alternative. I’ll take their capers, but again no tuna is evident.

Author and television chef Claudia Roden is an advocate of innovation, who observes: “There are not one or two or three versions of salade niçoise—but dozens, depending on what is available.” I think she’s hit the nail on the head on the subject of using seasonal ingredients for variety.

Nigel Slater, the cook who writes, makes the valid point that with classic dishes, the diner knows what it should look and taste like and wants the serving placed in front of him to resemble it closely. Other chefs will offer this variation or that addition, but he concludes:

Of course, none of them will quite match up to the perfect salade niçoise you had on holiday a few summers back, your table set under a white parasol just a couple of steps from the beach. You were tanned, your shoulders sparkled with sand and you had the quietly smug smile of someone who has had sex three times in the last 24 hours. Sadly, there is no seasoning quite so tasty as nostalgia.

I had my own first salade niçoise in a little beach café on Nice’s Promenade des Anglais in my late teens. I remember the crisp chopped lettuce, the tuna and the oily black olives. The latter I was tasting for the very first time, since olives did not feature in my recently vacated boarding school diet. Nor tuna for that matter. I may have had a smile on my face, but not from sex, as I was travelling with my mum and dad, on leave from somewhere in Africa.

If that salade niçoise was perfect, it was because the ingredients were entirely local. In those days, even the tuna was probably fresh-caught from the Mediterranean. The anchovies would have schooled off the coast of Portugal. Always, the dish should speak of the salty breeze coming from the sea; the sun ripened purple black olives from dusty groves in the hills of Provence behind the town; plum tomatoes fresh from the vine, bursting with ripeness; the egg yolks bright yellow; everything reeking of garlic and olive oil.

Researching further, I discover a reference to the fact that Jamie Oliver offers a variation with cold cooked salmon. That’s my boy. But I can’t track down his recipe, so I’ll have to improvise.

NOTE: Recipes for VINAIGRETTE, HARD BOILED EGGS, GREEN BEANS and NEW POTATOES can be found in the cookbook. The trick is not to overcook the vegetables. Plunge them into a bowl of ice cubes to cool quickly and stop the cooking process. As always, my recipes feed four, unless otherwise specified. Since the ingredients can be so varied, increase quantities at the chef’s discretion for more or fewer diners.

WINE: Our wine expert and regular contributor, Jim Walker, highly recommends serving a nicely chilled rosé with salade niçoise. One from Tavel would be ideal, he tells me, and there are a couple of good ones currently available in limited quantities at the LCBO: Chateau Manissy Le Moulin Tavel and Domaine des Carteresses Tavel. Only in Ontario. Sorry! Jim will be in Provence in the autumn and I’m sure he will share those adventures with readers once he recovers from a surfit of rosé! 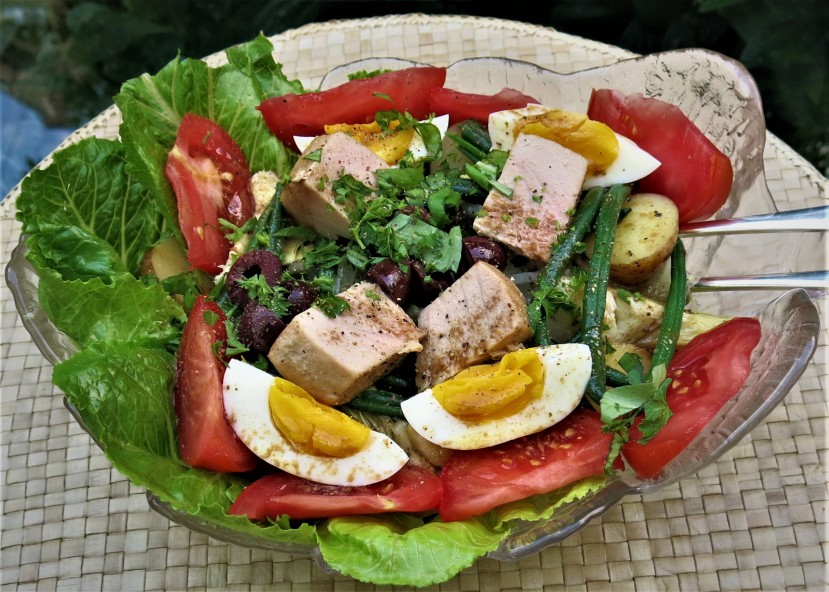 Please “like” our blogs, if you have enjoyed our musings, or add a “comment” — clickable at the top or bottom of each story. Via “comment,” let us know where you stand on the salade niçoise debate and what ingredients you prefer.

This is Nigel’s 253rd blog on Gentleman’s Portion. The search function works really well if you want to look back and see some of our previous articles. All recipes are under Market to Table, q.v.

Market to Table: The Cookbook is a great a gift idea for yourself, friends, family or anyone who loves to cook, available for about $12 as an eBook on Lulu.com, i-Tunes and Amazon. 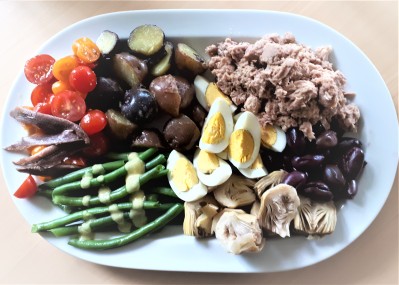 Thanks to Hélène for sharing a photo of her version of this delicious dish, with her additional variations noted in “Comments” below.

As always, we encourage readers to add their own comments and now send us your own pictures too!